A compressor that supports any format 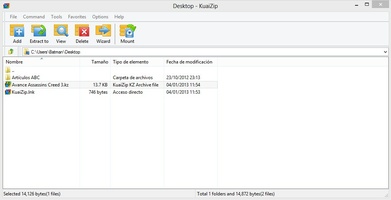 Advertisement
KuaiZip is a tool for file compression and decompression that has a number of advantages over its competition (like WinRar or WinZip).

In the first place, it's capable of offering a compression ratio between 10 and 30 percent higher than other, similar programs, especially when dealing with video or images. It supports many more formats than the majority of programs, as it not only works with .rar, .zip, etc., but can also open CD and DVD disk images in .ISO and other formats.

KuaiZip lets you mount virtual units in many different formats, like ISO, CUE, BIN, CCD, BWT, IMG, ISZ, MDS, MDF, and NRG. Doing it is as simple as accessing the corresponding section of the application.

The program's interface is just like that of other compressors, so you won't have any trouble getting used to using it.

KuaiZip is one of the best alternatives that we could find in terms of compressors and decompressors. It's fast, efficient, easy to use, and has everything you need to deal with any and every file.
Reviewed by Andrés López Translated by Molly Lincoln
Advertisement